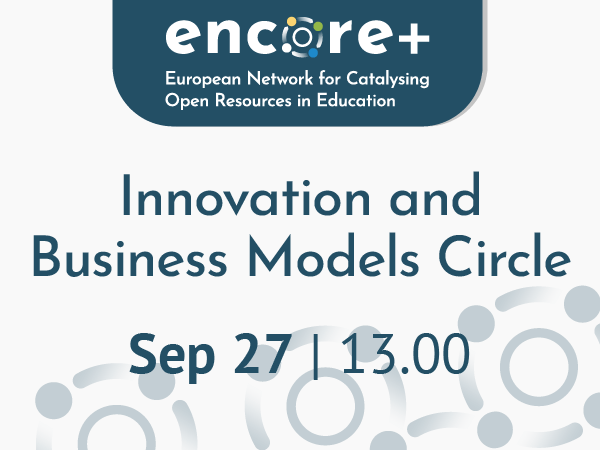 The first meeting of the Innovation Circle took place on the 27th September. This was the inaugural Circle meeting for this project but also for ENCORE+ as a whole. The session was attended by a range of people but predominantly educational technologists and OER advocates.

The draft position paper was circulated ahead of the meeting and available for consultation and comment afterwards as well. During the Circle there was a breakout session where participants were invited to comment on the document or otherwise provide feedback. This proved to be an exercise which gleaned some useful feedback.

Feedback from the discussion included the following:

A slimmed down version of the content for the Circle was also presented at the Open Education Global conference on the same day, raising awareness of the project to a worldwide audience.

The outcomes of this Circle form a good basis for moving forward with related work. The basic proposition of the ENCORE+ Innovation strand – that there is an untapped potential for Open Educational Resources (OER) to support innovation in European learning – was validated and several interesting avenues for exploration were identified.

A copy of the slides used to facilitate the workshop can be found clicking the button below:

Slides from the first Innovation Circle

Click here to watch the recording of the event

There are currently no events.
We use cookies on our website to give you the most relevant experience by remembering your preferences and repeat visits. By clicking “Accept”, you consent to the use of ALL the cookies.
Cookie settingsACCEPT
Manage consent

This website uses cookies to improve your experience while you navigate through the website. Out of these, the cookies that are categorized as necessary are stored on your browser as they are essential for the working of basic functionalities of the website. We also use third-party cookies that help us analyze and understand how you use this website. These cookies will be stored in your browser only with your consent. You also have the option to opt-out of these cookies. But opting out of some of these cookies may affect your browsing experience.
Necessary Always Enabled
Necessary cookies are absolutely essential for the website to function properly. These cookies ensure basic functionalities and security features of the website, anonymously.
Functional
Functional cookies help to perform certain functionalities like sharing the content of the website on social media platforms, collect feedbacks, and other third-party features.
Performance
Performance cookies are used to understand and analyze the key performance indexes of the website which helps in delivering a better user experience for the visitors.
Analytics
Analytical cookies are used to understand how visitors interact with the website. These cookies help provide information on metrics the number of visitors, bounce rate, traffic source, etc.
Advertisement
Advertisement cookies are used to provide visitors with relevant ads and marketing campaigns. These cookies track visitors across websites and collect information to provide customized ads.
Others
Other uncategorized cookies are those that are being analyzed and have not been classified into a category as yet.
SAVE & ACCEPT
Powered by